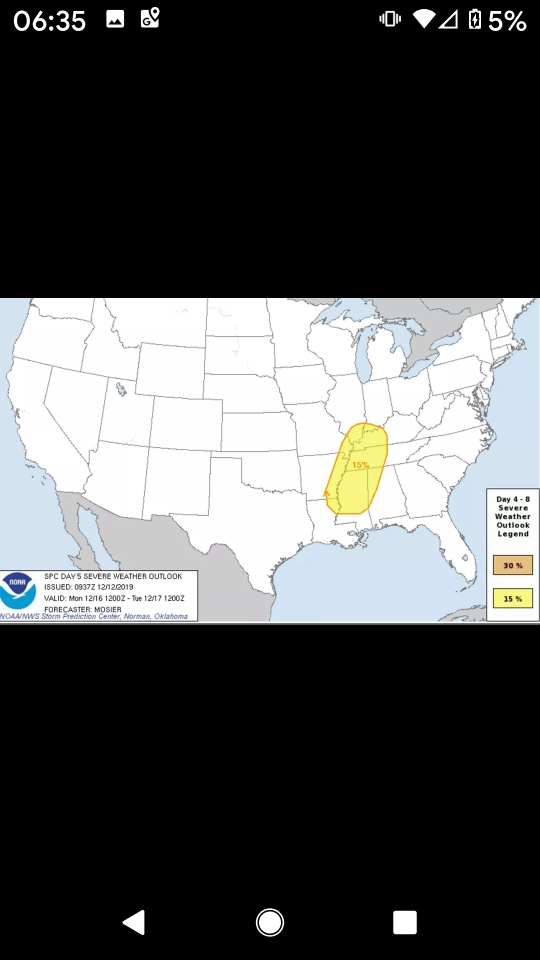 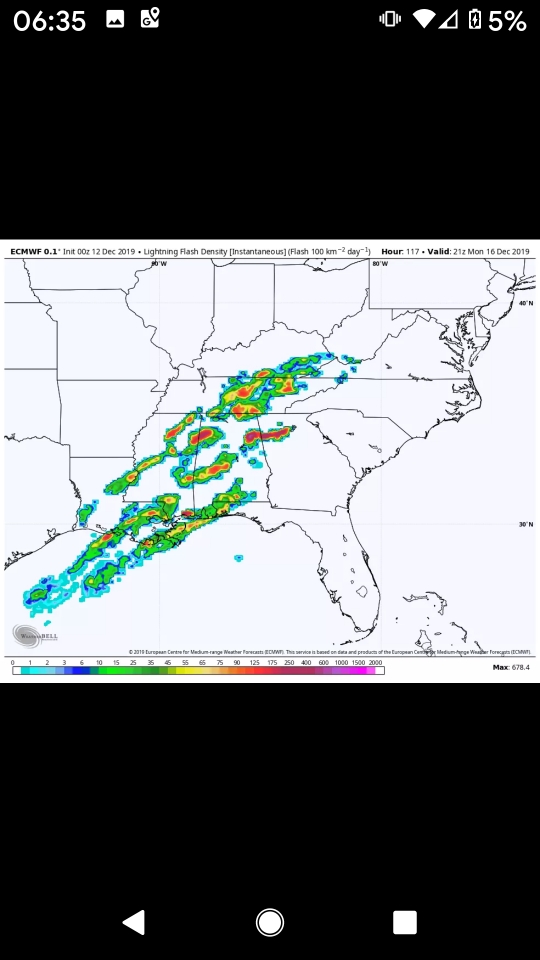 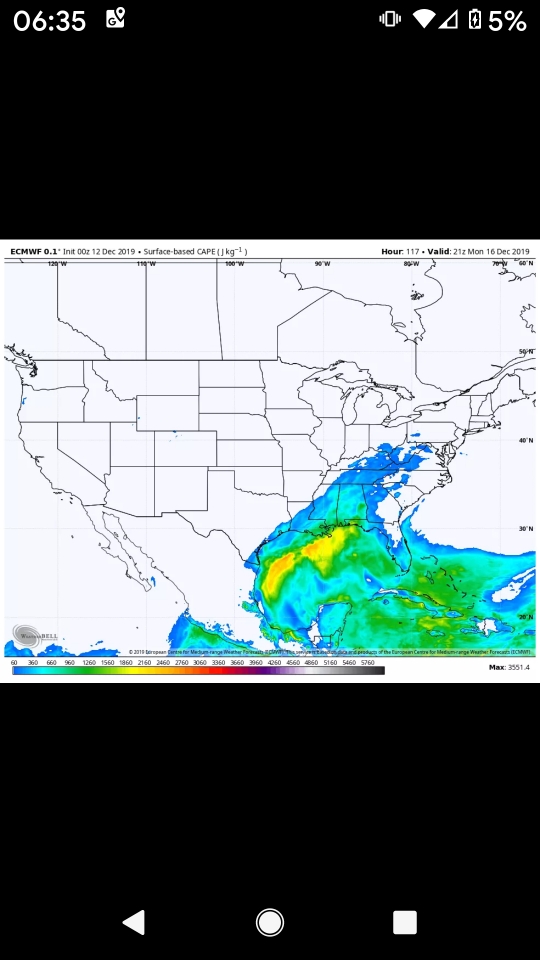 Sent from my Pixel 2 using Tapatalk

Quiet thread is this looking bad ?

Still has potential but, right now it looks like a Bama slight severe threat. Some instability but the low is kinda far away.

Tagat said:
Still has potential but, right now it looks like a Bama slight severe threat. Some instability but the low is kinda far away.
Click to expand...

I grabbed this from James Spann weather extreme video. A Slight Threat for MS/AL. James is saying possible a line of storms and maybe some straight line winds. Temps could be near 70. If dewpoints hit the 60's could have some strong thunderstorms. Then temps go in the wrong direction overnight and be cold again on Tuesday back in the 40's for North Bama.
Last edited: Dec 13, 2019

Leader of the bird cult

SPC threat has been expanded to Texas to Tennessee for the days we are tracking. But there’s a slight risk out tonight for Florida for those wanting to track now.

Decent cape for a december day

im going to be driving near tuscaloosa and hoover when this goes down may get some pictures if any good looking storms.

Yeah. I’m not overly impressed with this setup... but moving forward don’t think we’re done with severe with pattern showing up 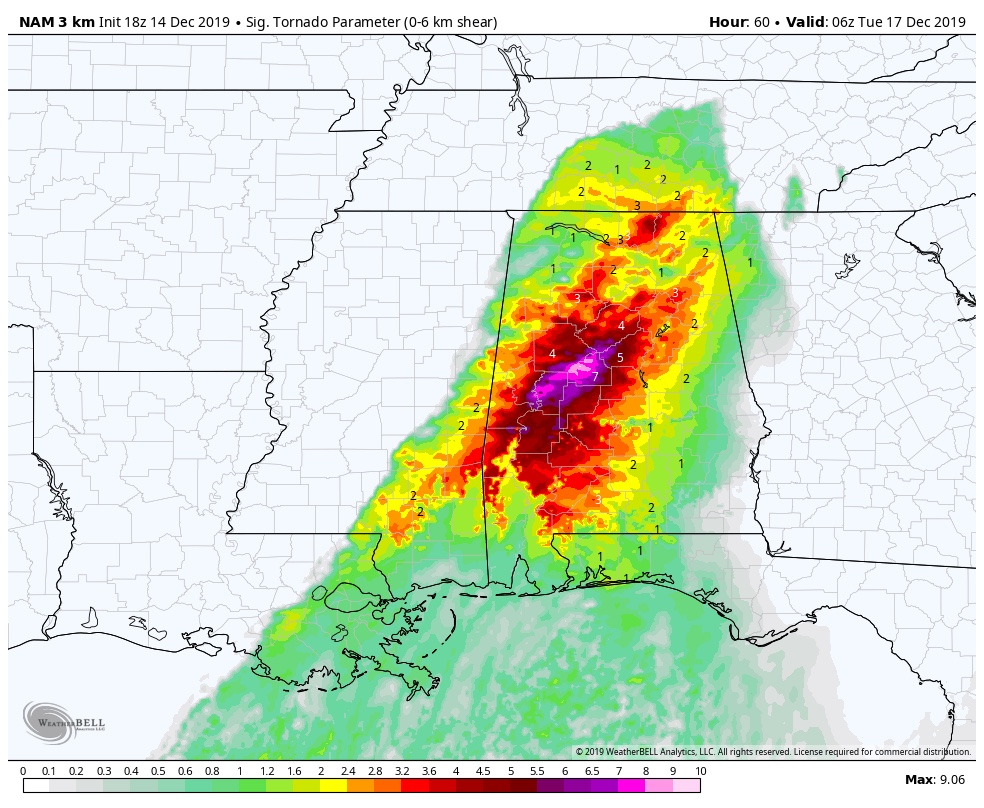 Sent from my iPhone using Tapatalk

Sent from my iPhone using Tapatalk
Click to expand...

Sent from my iPhone using Tapatalk
Click to expand...

WELL THIS DONT LOOK GOOD AS OF NOW, WILL HAVE TO SEE WHAT THE RUNS OVER THE NEXT FEW TIMES TELLS US

When will we know more like latest models? Is it trending stronger ?

SD said:
The 3k nam will be out soon so maps will probably start trickling in

Sent from my SM-G975U using Tapatalk
Click to expand...

Configuration of the jet stream still spells storm mode bit messy to me ....

Rick said:
Thank you can you post maps when out I live in a trailer and have a drs appt Monday afternoon so I'm watching closely
Click to expand...

Here are some maps. My guess would be a better threat initially to your west and northwest early on Monday with the better threat transitioning to you south and southeast during the overnight.

I added the max updraft helicity for the run. Nothing jumps off the page to me right now but that obviously can change 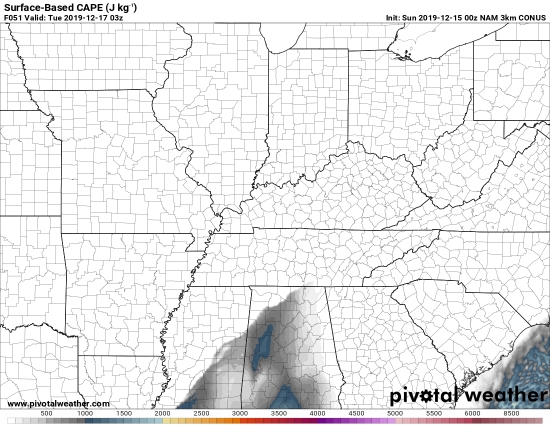 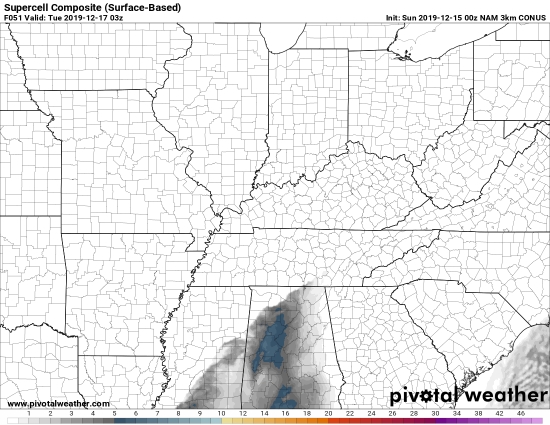 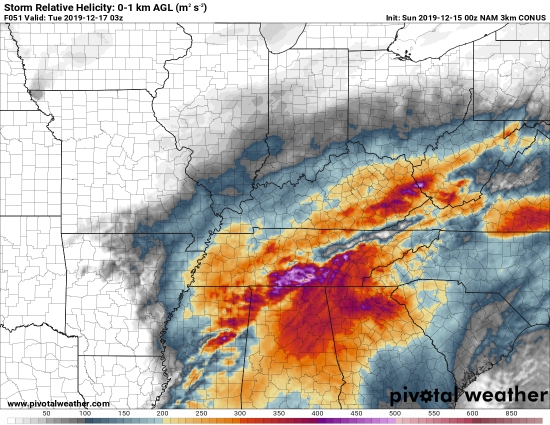 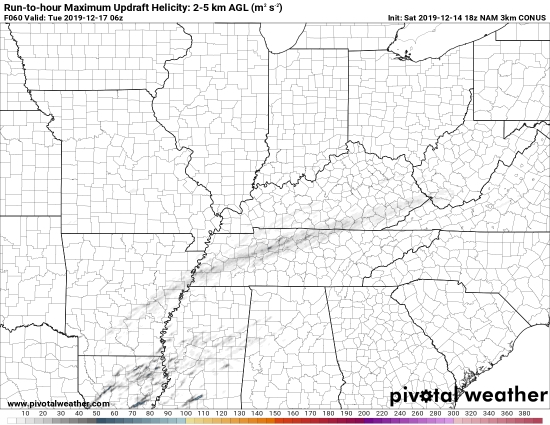 Rick said:
Thank you can you post maps when out I live in a trailer and have a drs appt Monday afternoon so I'm watching closely
Click to expand...

@SD THAT UPDRAFT MAX RUN IS THE 18Z

PEA_RIDGE said:
@SD THAT UPDRAFT MAX RUN IS THE 18Z

...THERE IS AN ENHANCED RISK OF SEVERE THUNDERSTORMS ACROSS PORTIONS
OF LA...SOUTHERN AND CENTRAL MS AND FAR WEST-CENTRAL AL...

Forecast guidance continues to trend slightly southward with the
evolution of the mid/upper trough ejecting across the Plains on
Monday, as well as in the evolution of the surface low over the
lower MS Valley region. Latest guidance is in good agreement that a
weak low will develop over northern LA with an inverted trough
extending northeast across MS into TN/KY. The low will track
northeast along the trough/frontal wave the TN Valley vicinity
around 00z and the central Appalachians by 12z Tuesday. A trailing
cold front will push eastward across the lower MS Valley, located
from eastern TN to near Mobile AL and the western Gulf of Mexico by
the end of the period.

A strong southwesterly jet continues to be forecast, and 700 mb
winds around 40-55 kt will be in place across much of the South
Monday morning. An 850 mb low level jet around 35-50 kt also is
forecast to persist across the Gulf Coast states for much of the
period. Strong southerly low level flow will transport mid 60s F
dewpoints as far north as central MS/AL with 70s F dewpoints closer
to the coast. While cloud cover will limit stronger heating, this
rich boundary-layer moisture beneath 6.5-7.0 C/km lapse rates will
result in MLCAPE values from near 500-1500 J/kg. Furthermore,
impressive vertical shear will support rotating updrafts/supercells.


Some uncertainty in storm mode remains, as deep-layer flow above
around 1-2 km is generally parallel to the surface front, which
would generally support more linear and/or cluster storm modes.
However, some guidance shows considerable backing of low level winds
ahead of the front, resulting in rather large low level hodographs
and increased frontal convergence. If this scenario pans out, mixed
modes including bowing line segments/clusters and semi-discrete
supercells will be possible. Regardless of storm mode, damaging
winds appear likely given relatively fast storm motion and strong
flow in the presence of an adequate thermodynamic environment.
Tornadoes will also be possible, via mesovortex processes in line
segments, as well as with any discrete supercells that develop.
Finally, midlevel lapse rates are stronger than typical across the
region, which will aid in hail production with more isolated storm
modes.

Various guidance has indicated a secondary and/or later threat may
emerge over portions of southern AL toward the western FL Panhandle.
A lead impulse as been evident in the last several forecast cycles
and this could support convection well ahead of the cold front, or
aid in further development/persistence of severe storms from Monday
evening into the overnight hours. Uncertainty is higher in this
scenario compared to the rest of the outlook area, but the Slight
and Marginal risks have been shifted eastward to account for this
possibility.

Now there's no instability good news but they been saying instability would be in the forecast ..... looks like a low threat

New HRRR they just released looked nasty for these areas

That run of the hrrr causes some serious stomach issues, look at all them kidney beans

One thing I’m noticing with soundings tommorow is that low level lapse rates aren’t the best and there’s basically no temp/dp seperation, so there may be cloud cover, which may limit low level lapse rates, but the moist BL may allow decent 3CAPE, hodographs are definitely impressive along with SRH, and 1km shear at nearly 40kts can easily can spin something, also mid level lapses are pretty good, which is not that typical, if you see some separation between the temp/DP tommorow with sunshine, there may be a more nastier setup

What concerns me is that you don’t don’t often see near loaded gun soundings in LA often, with such steep lapse rates, storms that fire won’t be your typical high shear low cape moist adiabatic crapfest, but instead a more springish airmass

Leader of the bird cult